The LP3 model is the fruit of over 20 years of management experience at various European companies and was created by David Fiorucci. The model was approved in 2009 as part of an MODCH Master’s thesis (Management of Organisations and Development of Human Capital) completed at Haute EcoleArc in Neuchâtel. This Master’s thesis received the Chris Argyris Award. The underlying hypothesis is the fact that the heart and essence of leadership is always the same.

The following question was put to employees: “In your experience, what constitutes a ‘good’ boss and what do you expect from him or her?” Several thousand responses were analysed and came from a number of European countries – Germany, France and England as well as Switzerland with its German, French and Italian-speaking regions.The teams inquired came from a wide variety of professional fields including service companies, financial service providers and industrial enterprises.

The result confirmed the hypothesis that the essence of leadership is the same everywhere.
Nine categories were identified. Twenty responses are generally sufficient to represent these nine categories.The employees have a very good idea of what makes a good boss.

Here is an overview of the nine categories. They are illustrated in a circle because none of them has priority. They are all important and depend on each other. There is neither a beginning nor an end. 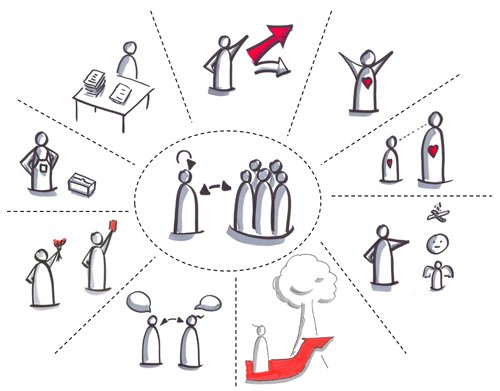 Self-reflection is placed at the centre.Whoever masters these nine categories will create a framework in which the members of his or her team feel at home. He or she will create an underlying atmosphere of trust and security. As a result, his or her employees will display commitment and perform well.

To be a good boss it is necessary to know your potential and control its impact in order to deliver the required performance.